This article summaries some of the more complex formulas and coded actions available using the Smart Workpapers. For information on the basics of named ranges see the knowledge article: Customisations Using Named Ranges.

These actions only use a named range to activate. Define the name of the cell that you would like the action to be visible (e.g. cell B2 for 'Tm_WorksheetTitle') and ensure the scope of the worksheet is set to the worksheet level.

For any of the coded actions that begin with 'Go_' ('Go_Index', 'Go_TickBox', 'Go_Toggle', 'Go_RollUp', etc), a hyperlink will need to be created in addition to the named range.

The following steps will assist in creating a named range and hyperlink:

Note: The named range is required to have a Scope specific to the worksheet being worked on and a Refers to of the desired cell/range on the worksheet.

Right-click on the cell you wish the coded action to be present in and select Link. To hyperlink, select Place in This Document and search through to find the named range you just created. Enter in text to display a screen tip showing the user what the hyperlink will do.

Note: For the action to work by clicking anywhere in the cell/s, rather than just the text hyperlinked, use the 'Wrap Text' option when formatting.

'Go_TickBox' and 'Go_Toggle' are very similar to each other. An example of both can be found on our checklists. The top of the Index sheet contains 'Go_TickBox' and the Y/N/NA section in the individual worksheets contain 'Go_Toggle'.

Follow the hyperlink process outlined in the above 'Using coded actions that begin with Go_' section with some minor changes. Set the font of the cell/range to 'Wingdings 2'.

'Go_TickBox' is designed to have only two options: ticked and unticked.

The following letters represent the characters in Wingdings 2:

Note: There is no 'empty' character. To achieve this, include a random letter at the end of the formula (e.g. '_S').  Use conditional formatting to change the colour of text when cell contains 'S' to be the same as the background colour. This will give the effect of an empty selection.

'Go_RollUp' allows you to show and hide cells and can be quite useful for long worksheets. There are two components to this coded action, the show/hide button, and the range of cells to be shown/hidden.

Note: It is very important to ensure the Scope for these named ranges is set to worksheet level in order to make the rollups work.

A Show/Hide button uses the named range 'Go_RollUp' and hyperlinks the desired cell to this named range. Follow the steps in the 'Coded actions that begin with Go_' section above. Then proceed with the 'Range of cells to be shown/hidden' instructions below.

Note: The hyperlink can be added to more than one cell in the row (i.e. you can create a button on the '+' and the section title). 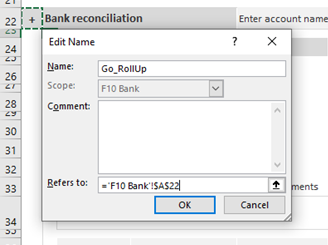 Range of cells to be shown/hidden

In order to specify which cells are the start and finish of the RollUp, the named ranges 'Tm_StartRollUp' and 'Tm_EndRollUp' are used

Note: As there are normally multiple roll-ups on one worksheet, it is recommend adding numbers to the end (e.g. 'Tm_StartRollUp_01' and 'Tm_EndRollUp_01'. Ensure that the start and end named ranges have the same number.

Note: It does not matter which column you have the 'Tm_StartRollUp' in as it only applies to the rows not the columns. 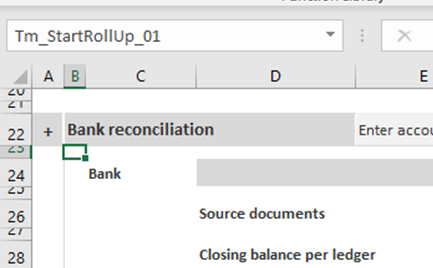 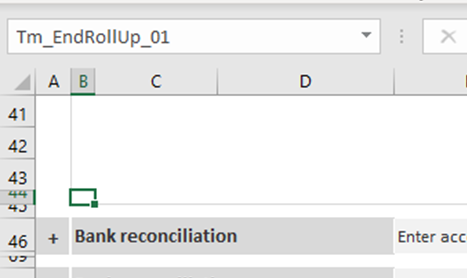 To create a +/- option that changes according to whether the section is expanded or collapsed, you need to enter the following formula into the relevant cell (typically the same cell with the 'Go_RollUp' action):

For the formula to work, you need to reference a cell that contains data. In the example below, a space has been added to cell A31. 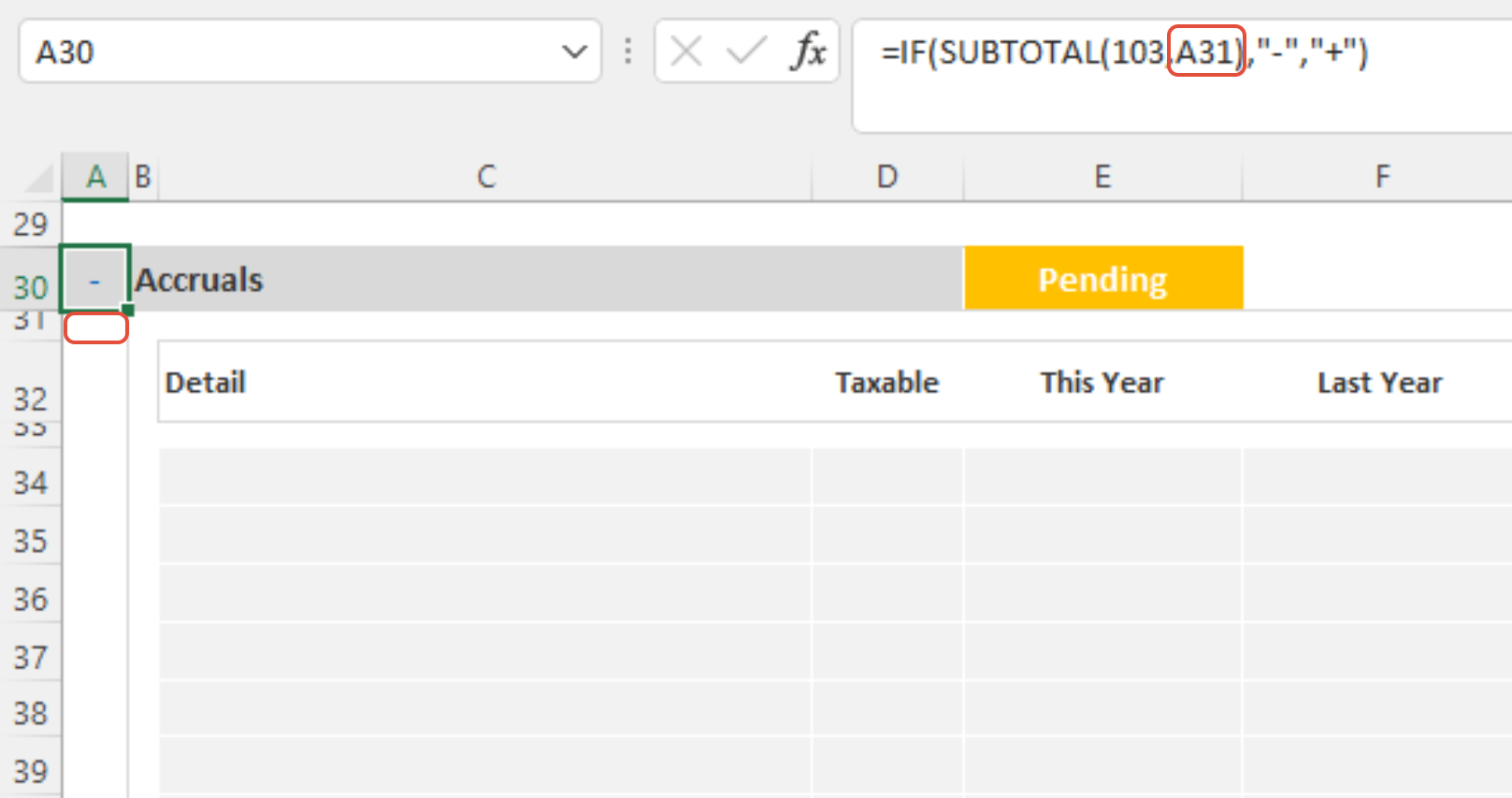 The 'Go_SumRangeDetail' creates a link to the worksheet where the value is found. If there is more than one worksheet, it will provide a summary of all sheets for the given [RangeName] and their balances to confirm totals and make navigation easier.

In the formula 'Go_SumRangeDetail_[RangeName], the [RangeName] refers to the specified named range.

Configure the template workpaper to have the following defined named ranges (no hyperlinks are needed):

Note: If there is more than one reconciliation, as is the case in the 'F10 Bank' worksheet, append a number to pair them together in series. For example: "Tm_ TBAccount _1" and " Tm_TBBalance _1", "Tm_TBAccount_2" and "Tm_ Tm_TBBalance _2" etc.